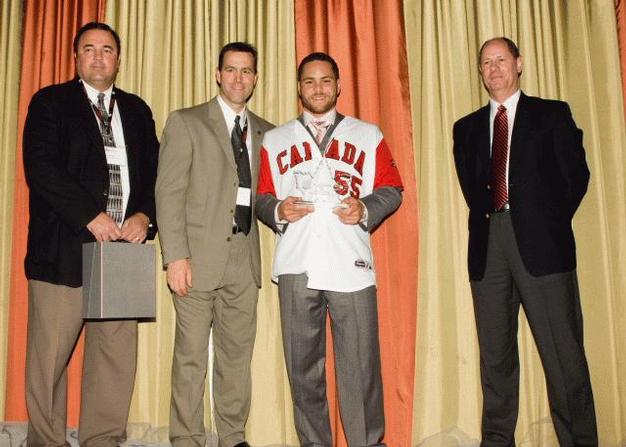 OTTAWA – Baseball Canada will host some of its most distinguished Major League alumni, corporate partners and friends at the Northern Lights Ballroom of the Renaissance Toronto Hotel at Rogers Centre on Saturday, January 24th, 2009. The National Teams Awards Banquet and Fundraiser will honour the accomplishments of alumni, such as Larry Walker, Jeff Zimmerman, Rheal Cormier and Chris Reitsma.  National League Rookie of the Year runner-up Joey Votto, Toronto Blue Jays pitcher Scott Richmond, Olympians Nick Weglarz and Brett Lawrie will be recognized for exceptional achievements in 2008. Paul Beeston, J.P. Ricciardi, Steve Rogers, Jim Fanning and Ernie Whitt will join a host of MLB and National Team stars such as Russell Martin, Shawn Hill, Peter Orr, Paul Quantrill, Stubby Clapp, Adam Loewen, Adam Stern, Mike Saunders and Phillippe Aumont for an evening of Canadian baseball celebration, emceed by Blue Jays radio voice Jerry Howarth. In addition to an elaborate awards presentation, social hour and formal dinner, this evening will feature many interactive opportunities with the stars and an extensive auction of sports memorabilia and sporting event packages.  With Sportsnet, TSN and The Score covering the Awards Presentations, this event will have a very strong media presence. This evening will also serve as a very important fundraising source for Baseball Canada’s National Junior and Senior Teams.  With the World Baseball Classic, World Cup and World Junior Qualifier, Baseball Canada’s National Teams will be very active on the world baseball stage in 2009. Tickets for the gala cost $400 per person, $3,200 for a table of eight guests or $4,000 for a table of ten guests. Baseball Canada has registered charitable status. There will be a pre-banquet press conference covered by Sportsnet, TSN and The Score at 3:30 pm, Saturday January 24th, in the Aurora Room of the Renaissance Toronto Hotel at Rogers Centre (Aurora Room is adjacent to the Northern Lights Ballroom). The press conference will begin with opening statements from Baseball Canada President Ray Carter and Director of National Teams Greg Hamilton.  This will be followed by a scrum style question and answer period with the players and MLB management personnel attending. For more information concerning the gala, please contact Greg Hamilton, Coach and Director of National Teams, at 613-748-5606 ext. 225 or via e-mail at ghamilton@baseball.ca. For media interested in covering the press conference, please contact André Cormier, Manager of Media & Public Relations, at 613-748-5606, ext. 221 or via e-mail at media@baseball.ca. 2009 National Teams Awards Banquet & Fundraiser Program2009 National Teams Awards Banquet & Fundraiser Registration Form 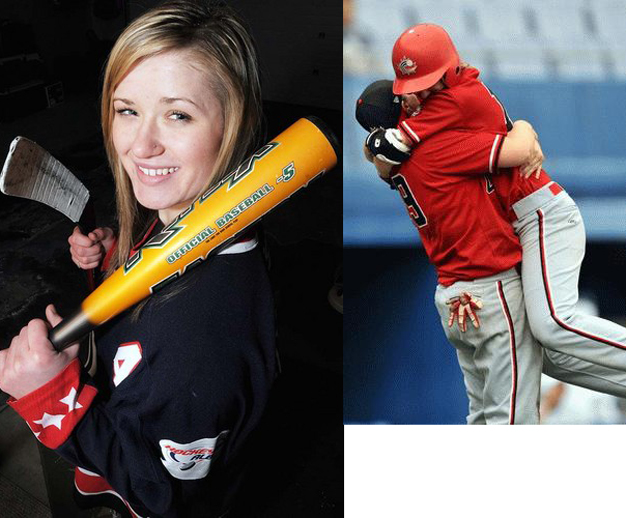 Meagan Cornelssen’s 2008 was a lot like her 2007. Both years she medaled with Team Alberta at baseball nationals, represented Alberta for hockey and played with the female midget AAA Storm. Those accomplishments alone would rank Cornelssen as one of the top junior athletes in Grande Prairie. The fact that she added being a key member of Canada’s silver-winning team at the Women’s Baseball World Cup to her list of accomplishments makes her a more than worthy selection as Grande Prairie’s Female Athlete of the Year for 2008. “I didn’t expect it. I didn’t even know you guys had this,” she said. “I’ve had female athlete of the year at school, but this, for the city, is kind of cool.” Cornelssen earned a spot on Team Canada after a strong performance with Team Alberta at nationals in Cape Breton, N.S. She was given the news during the medal ceremony after leading Alberta to a bronze medal with an 11-6 win over Quebec. She knew being named to Team Canada was a possibility heading into the tournament, but it wasn’t something she was expecting. “I didn’t want to think about it because I’d be more nervous when I was in Nationals. If that was all I thought about it would have affected my game. I kind of just lived in the moment,” she said. Cornelssen made the most of her time with the national team in Japan as well. “It was definitely an honour. Playing with the best girls in Canada was awesome,” she said. “I made lots of new friends, not just in my age group because it was 17 and up. It was just a great experience.” Cornelssen was the second youngest, and one of only three 17-year-olds, on the team. Don’t think because she was young that she spent her time in the dugout watching her more experienced teammates. Cornelssen played a pivotal role as the starting left fielder and rotated between the five and six spots in the lineup. She repaid her coaches for their confidence by batting .294 and stealing four bases – one behind the tournament leader. Cornelssen’s highlight of the tournament shows how important she was to the team making it to the finals – a first for either the men or women’s national team at a Baseball World Cup. “It was probably tying the game against U.S.A. and then us going on to win that game to go into the semi-finals,” she said. With Canada down one run, Cornelssen started the seventh and final inning with a single. She stole second before reaching home on a Stephanie Savoie single. Canada won the game, 7-6 and beat Australia by an identical score in the semis before losing to the host-country, Japan, 11-3 in the finals. Cornelssen was able to take plenty out of the experience despite not taking home a gold medal. “There were some girls who were on their fourth run for that team,” she said. “Their experience through the whole thing taught me some stuff, and just little fundamental things. I learned a lot.” Even though the local teams she plays on compete at a lower level, Cornelssen brings the same attitude to every game she did as a member of Team Canada. “Meagan is a workhorse,” said Storm coach Guy Anthony. “I have yet to see her play against anyone in our major midget league that can manhandle her. She out-muscles everyone she plays against whether they’re bigger or smaller. A lot of that has to do with her attitude that she won’t be beaten.” Cornelssen’s strength of character has led to her being looked at as a leader with the Storm. She was named team captain and was listed as the best player they’ve ever played with by eight of 12 teammates who took a team survey. “She is looked upon in the room as the girl who takes the team on her shoulders,” Anthony said. “That’s what they expect her to do and that’s what she attempts to do. She attempts to be everything she can be for her team.” Cornelssen leads the team in scoring to this point in the 2008-2009 season, with 20 points, including 10 goals. She has already left her stamp on 2009, less than a week into the New Year. Cornelssen was named top forward for the North after scoring a goal and an assist during the Alberta Major Midget Female Hockey League all-star game, Jan. 4. “It was fun. I got two points and I got top forward for the North,” she said. “It was a good experience.” With more than 11 months remaining in 2009, Cornelssen is looking to spend the rest of the year adding to her already impressive resume. “I definitely want to make the national team again for baseball,” she said. “Maybe decide where I want to go to school. Those are my two main goals.” 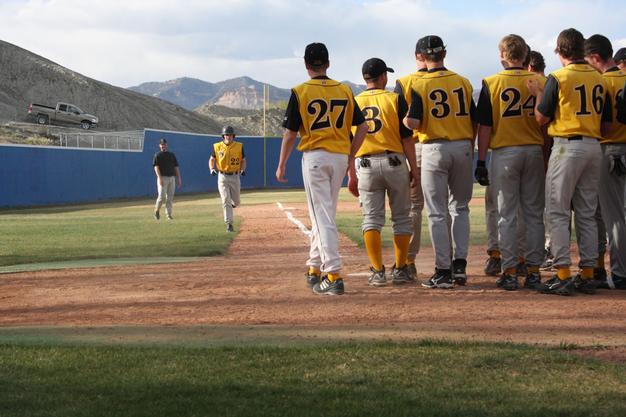 Bantam Boys Championship Has a Home for Three Years

OTTAWA – Baseball Canada announced today that the city of Vaughan, Ontario was awarded the Bantam Boys Championship for 2009, 2010 and 2011. This is a first for Baseball Canada, who has been in discussions with the board of directors to attempt such a venture to help promote the championships with sponsorship partners. “Vaughan’s application was perfect timing to test this measure as they felt it necessary to have the Bantam Nationals for three years for just that reason,” says Baseball Canada Director General Jim Baba. Vaughan hosted a successful Peewee Championship in 2008, and Baseball Canada felt it was a great area to test the new endeavour. “After the success of 2008 with the Pee Wee nationals,” adds Baba, “we feel that Vaughan will showcase to the rest of Canada that this is the way of the future for many other age divisions as well.” “After hosting the 2008 National Pee Wee championships, we were pleased when the city of Vaughan presented a bid for the Bantam Nationals in 2009 and beyond on such short notice,” added Baseball Canada President Ray Carter.  “We know they will do a terrific job hosting the event and we look forward to working with the hosting group for the next three years.” For the 2009 championship, Baseball Canada will use the current 54’/80’ dimensions for the diamond, but will seriously consider implementing the 60’6”/90’ dimensions for the 2010 and 2011 Championships. The 2009 Bantam Boys Championship will take place from August 20-23.

Morneau Named Athlete of the Year

OTTAWA – Minnesota Twins first baseman Justin Morneau finished off 2008 with a bang as he was named the 2008 Male Athlete of the Year by both the Canadian Press and the Canwest News Service. The New Westminster, BC native continued his solid play at the Major League level, hitting .300 with 23 home runs and 129 RBI in 2008. Morneau beat out athletes such as Pittsburgh Penguins star Sidney Crosby, and Olympians Eric Lamaze and Simon Whitfield for the honour. “Any time you can beat out a hockey player in anything in Canada, it’s an accomplishment,” says Morneau.  “It’s pretty cool, especially with the people who have named to this award.” Morneau finished second in the American League MVP voting this past season.  Other highlights in 2008 include winning the Home Run Derby at Yankee Stadium, defeating Josh Hamilton of the Texas Rangers; and scoring the winning run in the 15th inning of the MLB All-Star Game. His Minnesota Twins also finished a game shy of making the playoffs in a year the team was rebuilding and was expected to struggle.  Morneau was looked upon to provide leadership for this young team. “We have some veteran guys but at the same time, when you hit fourth… you feel like you have some responsibility of being a leader,” says Morneau.  “For me it’s not by talking, it’s by example and working hard.” At the end of the day, Morneau hopes that his accomplishments inspire more Canadians to pursue the game of baseball as their sport; much like Larry Walker did for him. “Hopefully guys can see (my success) and know there are sports out there other than hockey that Canadian kids can play.”